Could your business be part of a ‘proactive approach’ to flooding`?

Why flooding needs a ‘proactive approach, not a reactive one’

Richard Bailey is the managing director of Huddersfield-based Environmental Defence Systems and has been working in the flood resilience sector for almost 20 years. In 2006, he invented FloodSax, an award-winning alternative to sand bags, which went on sale the following year and is now available worldwide.

Richard explained: “It came after I’d invented a sand-less sandbag for the military called a BlastSax. The Government were so impressed, they asked if I could do a similar one to help prevent flooding for homes and businesses. We’ve now sold almost three million worldwide and they’ve even held back storm surges in the USA after hurricanes.”

“Even back then, the Government realised climate change was having an impact on our weather patterns, especially with more flash flooding and so called ‘one-in-a-100-years’ events that were happening far more often than that. Over the last 14 years we have seen this accelerate; just think of the terrible flash floods that caused millions of pounds worth of damage in London this summer.” 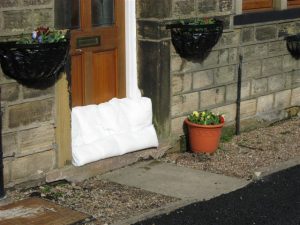 Richard is keen to help people understand that it’s the responsibility of every householder and business to prepare themselves and their property for the risk of flooding.

He said: “Why is it that people’s attitude to flooding is similar to the one they have for burglary? Most people think it will never happen to them and only invest in security cameras and lights when they have actually become a victim.

“The trouble is a flooding insurance claim is typically 37 times more than one for burglary; the average claim for homes is now £31,000. It’s too late then anyway as the damage is so colossal the family may well have had to move out of their home for months, causing financial and social hardship, not to mention the devastating impact on their mental health. Yet all this could so easily have been avoided with effective flood resilience measures. Flooding needs a proactive approach, not a reactive one. That’s the message we still need to get through to people.” 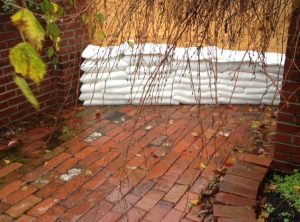 Richard is encouraging businesses to take advantage of the free workshops being run by the Flood Innovation Centre, explaining: “These workshops are desperately needed as people will benefit greatly from knowing the range of flood resilience products on the market and seeing for themselves how they work and how effective they can be.”

He said: “The benefits of being prepared for flooding are huge. If you’re flooded, you could lose your business as many don’t reopen once they have suffered a catastrophic flood.is at risk of flooding, Richard added: “That’s well over five million properties. Yet, flash flooding or a major

“If it’s your home that’s flooded, the hassle of sorting out insurance and repairs is horrendous. Many people have to leave their homes for months and the impact on their mental health can be devastating. Yet so often this needn’t have happened in the first place.” water mains burst or internal leak actually means that everyone is at risk of flooding. Do you know anyone who hasn’t had a severe leak or flood in their home or business at some point?